karimunjawa backpacker
Tips for Backpacker Trips to Karimunjawa From Jakarta – Karimunjawa is one of several famous beach attractions in Central Java Province. For heading to karimunjawa, you have to go to Semarang, Kendal or Jepara first. For example, choosing a boat crossing from Jepara, after arriving in Jepara, you can use the ferry or maritime express ship. 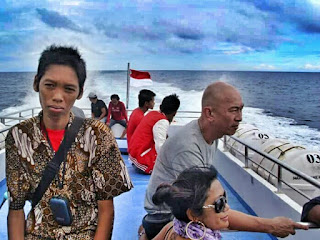 If you use the ferry start from Jepara – Karimunjawa, you will travel for approximately 5 hours. This ship’s name KMP Siginjai, can ride a vehicle (motorcycle / car). It’s different if you choose to use express fast ship, you need 2 hours drive to arrive at this island. The name of the ship Maritime Expressonly for passenger crossings.

This is the story of the experience of a blogger who travels to Karimunjawa a la backpacker. This post is specifically about share the cost of a vacation to karimunjawa from jakarta.

Just go ahead, the journey starts from Jakarta to Karimunjawa using the Economy class train with the aim of Poncol Station, Semarang. At that time the price of the train ticket was Rp. 65,000 to Rp Semarang. After arriving at Poncol Station, we were confused about what to take to Jepara Harbor, because the train arrived early in the morning. Finally we continued our journey by renting a car (let’s call it Avanza) to Jepara at a cost of IDR 400,000 one way (drop system). 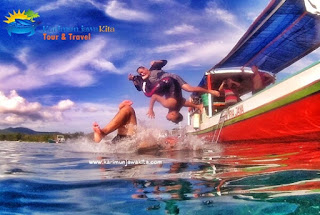 We chose this method because apart from the time it is still night (there is no public transportation to Jepara) it is also to make time more efficient. If the day comes, maybe we can retail the transportation by moving the terminal to Jepara City. The journey from the station to Jepara takes approximately 1 hour 45 minutes (no traffic jams, because it is still early). But if you want to stay in Jepara before going to Karimunjawa, there are lots of homestays and hotels near the port, such as Samudra Hotel, Kotabaru Homestay, Dseason Hotel, etc. If you want a cheap Homestay rental fee, the cost ranges from Rp. 80,000-180,000/night per room. Whereas hotels in japan the rate is between 400,000 – 1 million a night.

After arriving at the Jepara Kartini Harbor, we immediately bought KMP Siginjai tickets at a price of 60,000. Then we went to Karimunjawa using the KMP Siginjai Ferry which departed at 07.00 am. Upon arrival in Karimunjawa, we were greeted by an invitation to the homestay that we had rented. After cleaning, we continued to have lunch and were invited to the first spot for sunset hunting which is not too far from the homestay. Luckily we got a homestay which is by the beach which adds to the wonderful experience of our vacation. Our first dinner was held at the Karimunjawa square. This is because we are very curious about the night atmosphere in the square. And sure enough, many tourists ranging from Caucasians to local tourists poured out for dinner in the square. It’s not surprising because we can choose many foods in this place, all of which are dominated by seafood. 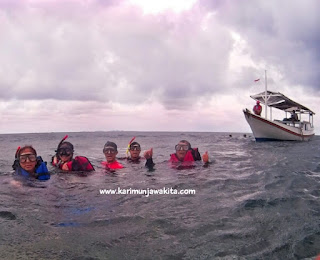 The next day we started our adventure. Here’s the itinerary:

Our group started the activity at 8 am to the shark sanctuary, it only took 30 minutes to arrive at this place. To enter the shark captivity, the entry fee is 50 thousand / person. After being satisfied wrestling with the sharks, then head to our first snorkeling spot and named Little Deer, it took 30 minutes. Well, the place where the sharks are kept is called Big deer. After snorkeling at Menjangan Kecil for about 1 hour, we headed to Little fir for lunch and took 1 hour to get to this place. From small fir, continue to snorkel again to burnt fir by spending 15 minutes to reach it. And after a day of snorkeling we stopped at cape gelam to enjoy a very beautiful sunset.

Actually we were confused to do snorkeling activities or land tours. But because many want a full land tour while in Karimunjawa, we decided to keep snorkeling according to the original plan. Finally we started snorkeling to the first spot, namely to Menjangan Kecil. The spot here is quite beautiful, but we didn’t snorkel in this place for long because the current was quite strong at that time. After being satisfied in that place, we continued our journey to Gelayang Island for rest and lunch. The island is quite beautiful, white sand and the color of the sea is turquoise green. In this place we happened to get free entertainment from island youths who like to jog and carry their tapes everywhere. Suddenly, friends who finished lunch joined the young man to exclaim and dance together. Satisfied with taking photos and having lunch on this island, we continued our journey to Gosong Cemara island to continue snorkeling. After being satisfied with snorkeling, we returned to the inn, rested, and had dinner in the square for the last time.

Early in the morning we had to checkout the inn because it was the last day of our vacation in Karimunjawa. It seemed a little short, but it’s okay with that little time I was able to get an extraordinary experience by enjoying the beauty of Karimunjawa and also getting acquainted with 13 other friends from various islands in Indonesia. It’s an unforgettable experience. We headed to the port in two cars. Our car only contained a few people and was separated from the rest of the group. But before we headed to the port, the car driver took us to a new tourist spot, Bukit Love. Why is it called hill of love ? This is because on this hill there is a very large Love inscription. In this article, we pose with various styles. Once satisfied, we continued our journey to the port and returned to our respective cities.

For the backpacker-style travel costs that we spent 4 days 3 nights in Karimunjawa, you can see the details below:

Note:
The total share cost does not include the cost from home to the ferry port, the cost of buying souvenirs and personal expenses along the way to the ferry karimunjawa from jakarta.