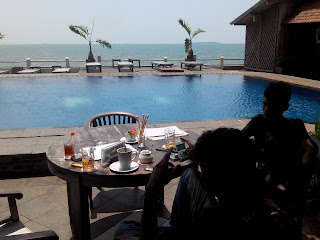 Especially for Central Java, the tourism offered is quite complete. Starting from nature tourism, beaches, seas, and mountains, to historical tours, such as temples, old mosques, and other ancient places of worship which until now can still be used and visited for holidays.

Central Java itself has an archipelago that is well known by local and foreign tourists. Yes, the Karimunjawa Islands have indeed gone international. Lots of tourists from various countries who visit the island of Karimunjawa every week. Luckily, Central Java currently has a governor who is creative and willing to build the tourism sector. It is proven that the Governor of Central Java, Mr. Ganjar Pranowo, took the initiative to create a special route for tourism routes from Bali, Semarang, to the Karimunjawa Islands.

The following is complete information on the writings copied from the KOMPAS online newspaper, in full below:


This tourist route is a pilot for optimizing a number of superior tourist objects. For this service, there are already pioneer flights from Semarang to Karimunjawa twice a week, namely Thursday and Friday. Flights from Denpasar (Bali) to Semarang are provided via Garuda Indonesia once a day.


Furthermore, from Semarang to Karimunjawa provided Susi Air aircraft with a capacity of 10 passengers. “This is just a pilot. Later if I can bring 100 tourists, I ask to be opened every day. I don’t want it to be open every day without passengers,” he said.


KOMPAS/P RADITYA MAHENDRA YASA Boats take tourists to enjoy the underwater beauty around Menjangan Kecil Island, Karimunjawa, Jepara Regency, Central Java, Sunday (9/12/2012). The German Ministry of Economic Cooperation and Regional Development Institute (GIZ RED Central Java) ), Solo tourism actors, and local governments have started working together to develop tourism in the context of Visit Central Java 2013. Until now, Karimunjawa archipelago facilities are still minimal with road and electricity facilities to support tourist comfort.
Ganjar explained, the tourism route that is being pioneered must be supported by good infrastructure. He said facilities such as airports, ports and stations should be able to attract tourism players. “The first thing to look at are airports, ports, then public facilities. Rails should also be pestered. It will be prepared together,” he said.


For airport development, especially at Ahmad Yani Airport in Semarang, the Governor of Central Java asked the directors of PT Angkasa Pura to be able to complete the construction of the new airport on schedule. Ganjar offered, if he needed encouragement from him, he would be happy to help so that the process could be completed quickly. “I will help, if you need by the way, I am ready. I see the public’s interest is so high,” said Ganjar.