karimun jawa, Karimun Jawa news, karimunjawa info, karimunjawa travel info
Hatchlings or baby turtles are one of the animals that are often found in the waters Karimunjawa. But its current existence is increasingly worrying because of human hunting. The delicious taste of turtle meat is liked by many people. So that turtles are now the target of hunters to be sold in the market. This problem causes the turtles to decrease in number because many are taken by fishermen. 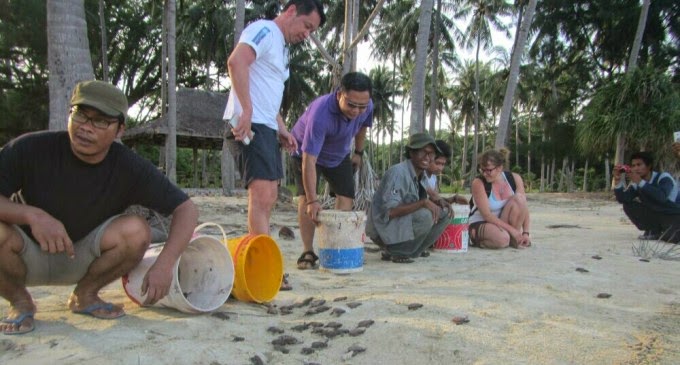 Turtle conservation is currently being promoted by the local government of Karimun Jawa. This is done for the preservation of turtles whose ecosystems are getting more and more worrying day by day. As written on the site Japan Today, hundreds of turtles will be released in the waters of the Karimunjawa sea. Please read below for news on turtle releases in karimun java.

“KARIMUNJAWA – A trip to Karimunjawa National Park is incomplete if you haven’t visited a turtle breeding center. Usually every travel agent in Jepara and Karimunjawa is sure to include a visit there in their tour.


Just like what Agust Frolind did, tourists from the Netherlands and Camila from Finland took the time to stop by a turtle sanctuary on the island of Karimunjawa. The two foreign tourists along with several domestic tourists from several cities such as Pati and Semarang are also welcome to release the young turtles which are often called Tukik into the high seas. The release of the hatchlings was at Nirwana Beach, Karimunjawa Island. This is done with the aim of maintaining the sustainability of the turtle ecosystem in the Karimunjawa sea.


Frolind tourists from the Netherlands admitted that he was very happy on vacation to Karimunjawa Island. Besides having the beauty of the sea and good coral reefs, he also said he was happy when tourists were invited to release hundreds of turtle hatchlings.


“I just found out that if in Karimunjawa there is a turtle release program, it is hoped that the released turtles will be able to breed and maintain their sustainability, so that tourists can enjoy the natural beauty perfectly with the turtles swimming freely in the ocean,” said the foreign tourist who speaks fluently in Indonesian. Thursday (19/3) .


Meanwhile, Kuswadi from the Karimunjawa National Park Office said that on this occasion his side together with tourists released more than 500 turtle chicks. For other tourists who want to release turtles, it is welcome and free of charge at all.


“We continue to protect turtles so that their sustainability is maintained, one of which is by releasing these hatchlings with marine tourists,” he said.


Kuswadi further explained that there are 22 islands in Karimunjawa which are breeding grounds for turtles to lay eggs. However, the turtle’s favorite island to lay eggs is an island with white sand, such as Menjangan Kecil Island and Gleyang Island.


“Currently there are 3 types of turtles in Karimunjawa, namely the Hawksbill turtle, the green turtle and the olive ridley turtle. However, the turtle that lays the most eggs is the green turtle,” he concluded“ karimunjawa info
The route to Karimunjawa can now be via Kendal