karimunjawa travel info
Tourism Places in Karimunjawa ~ Karimunjawa Archipelago is a range of islands which are administratively included in the territory of Jepara Regency, Central Java. Karimunjawa is one of the most beautiful marine parks in Indonesia for now. The Marine National Park Center, which is located in the middle of the Java Sea waters, has become one of the popular tourist destinations not only domestically but also abroad. 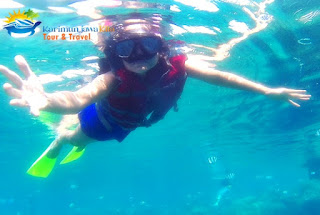 The main attraction of Karimunjawa tourism is the islands which have beautiful and enchanting views. Coupled with the friendly and fun residents, Karimunjawa is the spotlight of the world and is visited by backpacker mania. The waters of Karimunjawa have waves that tend to be quite calm so that tourists can easily see the beautiful underwater scenery because the sea water is clear.

The number of islands in Karimun Jawa is 27 islands, but only 5 are inhabited. What are some? Namely Karimunjawa Island itself, Kemujan Island, Mosquito Island, Parang Island and Genting Island which are in the east. 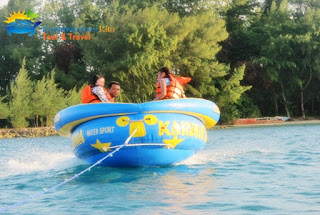 There are many interesting tourist spots that we can visit while on vacation in Karimun Jawa. The following are the 13 most popular and easily accessible tourist spots:

Tanjung Gelam Beach is a beach in Karimun Jawa which is known as one of the best spots to enjoy sunset views. If the weather is sunny, the view of the sunset on this beach looks so alluring. Basically, this beach is already beautiful with white sand and very calm waves. Beaches with this kind of atmosphere are common in Karimun Jawa. As a friend enjoying the afternoon atmosphere, you can buy young coconuts which are widely sold in stalls around the beach

Barracuda is a beach located on Kemujan Island. This beach has a very beautiful view with views of the islands in the distance. With sea water that looks very clear and calm, this beach will tempt anyone to immediately make out with the water. The uniqueness of this beach is the presence of black stones with a unique shape. If you want to spend the night on Kemujan Island, around Barracuda Beach there is an inn in the form of a resort which seems quite expensive

Nirwana Beach is the longest beach in the Karimunjawa Islands. The location of this beach is on the east side of Karimun Jawa Island. The atmosphere on this beach itself is not much different from some other beaches in Karimun Jawa with views of white sand and clear and calm sea water. The hallmark of this beach is the presence of coconut trees that grow a lot on the beach. The scenery and atmosphere at Nirwana Beach is really a “beautiful beach”

One of the interesting activities that we can do in Karimun Jawa is swimming with sharks. Yep, sharks known as the most ferocious predators in these waters also have a more melancholic side. On Menjangan Besar Island there is a green captivity where we are allowed to swim with the sharks in the captivity. Of course the sharks in captivity are tame sharks. Although the size is also relatively large. Swimming in the shark captivity on Menjangan Island will be a horrifying experience

Geleang Island is another beautiful island that we can visit in Karimun Jawa. This uninhabited island also offers beauty that will make us lazy to go home. From this island we can see the view of Karimun Jawa Island from a different side. The waters around the island are also an ideal place for snorkeling. The beach is also no less beautiful with white sand that is so beautiful and alluring

Little Island is one of the islands that is too dear to miss. Surrounded by white sandy beaches typical of Karimun Jawa, Cilik Island also has a water area with very calm waves. Coral reefs with various shapes and colors are widely available around the waters of Cilik Island, so this island is also one of the ideal snorkeling spots in Karimun Jawa. A wooden pier on this island can be used as a place to pose to capture the moment on Little Island

The beauty of the scenery and tropical atmosphere in Karimun Jawa make it one of the favorite places for young couples for their honeymoon. If you go to Karimun Jawa with your partner, there is one place that must be visited, namely Bukit Love. This hill is located in Jatikerep Hamlet, Karimunjawa Village. At the top of this hill there is a monument bearing the word “LOVE”. Taking pictures with the background of the monument is an activity carried out by almost all tourists who visit Love Hill