indonesian tour, tour, travel info
The mainstay of tourism in Jepara Regency, Central Java, mostly features beaches and the sea. It is natural, because Jepara is located on the edge of the Java Sea. Meanwhile, the mainstay at this time is Karimunjawa tourism. This place is famous not only in Indonesia, but also abroad. 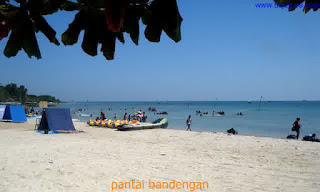 For tourists who want to enjoy tourist attractions near the city of Jepara, they can visit Bandengan beach. Here is very suitable for those of you who like to bathe in the sea. If you want to relax with your family while enjoying the beach breeze, you can see Kartini Beach. Some of these tourist attractions have their respective advantages. As written in the following online newspaper Kompas.

“The government of Jepara Regency, Central Java, still relies on marine tourism objects to attract tourists, especially during the school holiday season and ahead of Lebaran 2015. According to the Head of the Jepara Regency Tourism and Culture Office, Mulyaji through the Head of Tourism Zamroni Lestiaza in Jepara, Tuesday (5/5). /2015), marine tourism objects in Jepara have been the backbone to attract visitors, including in terms of achieving the retribution target.


Marine tourism objects that are a mainstay in Jepara include Bandengan Beach, Kartini Beach, Protugis Fort Beach, and Karimunjawa Island. Facing school holidays and ahead of Idul Fitri, he said, there was no special preparation, because so far efforts to improve and add facilities and infrastructure are also made every year. For now, he continued, each tourist attraction which is a mainstay has been fulfilled with its facilities and infrastructure.


“Even if there are additions, of course, efforts will be made through budgeting proposals taking into account the availability of the budget,” he said.


“We are optimistic that the target can be met, considering that last year we were also able to meet the target because it realized Rp1.1 billion,” he said.


Based on observations, the tourist objects whose visits are adjusted to the weather, namely Bandengan Beach and Karimunjawa. Especially for Bandengan Beach, the majority of visitors want to enjoy bathing in the sea, so that when the weather is not favorable, visitors tend to decline, so Karimunjawa is also adapted to the means of transportation that crosses because when the waves are high they usually don’t operate.


While Kartini Beach can still be enjoyed, even though the local sea weather conditions are not supportive.”