About Karimunjawa, karimunjawa info
Suraya Power Plant or PLTS for short, has long been the choice for power plants in Karimun Jawa. However, so far it has not been fully realized. Even though there are some who have used it, only a few of the residents, maybe not even 5% of the total population of the Karimunjawa sub-district. 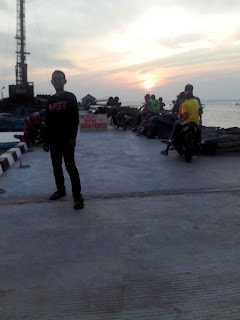 As for the existing street lights, most of them are PLTS facilities from outside parties. And this time the leading electronics company in Indonesia, Panasonic, reviewed the management of assistance that had been provided in the Karimunjawa archipelago. The following is complete information taken from the online media Antara News.

“Karimunjawa, Jepara (ANTARA News) – PT Panasonic Gobel Indonesia conducted a review of the management of the assistance for a Solar Power Plant facility in the form of a Power Supply Container located at SDN 01 Karimunjawa, Jepara Regency, Central Java, Friday.


The review was carried out together with the Project Leader from Panasonic Corporation, Susumu Iida, aiming to find out the extent of the management of the facilities that have been donated since almost a year ago on July 17, 2014.


On that occasion, the Panasonic had met with the District Government of Karimunjawa and the community association that has been the manager of the facility.


One of the directions that is appealed to the management association is to improve coordination and reporting to the District Government, which so far has not been going well.


The reason is, the Camat Karimunjawa Muhammad Tahsin acknowledged that for the past year there has not been good coordination between the community managing the facilities and his party.


However, Tahsin said that so far the electricity generated from these facilities was used to mainly supply the needs of SDN 01 Karimunjawa, the District Office and the Office of the Technical Service Unit of the Youth and Sports Education Office.


“Indeed, since then, the students of SDN 01 Karimunjawa have been helped by the availability of electricity during the day to use the electronic equipment needed to support learning activities,” he said.


For information, until now Karimunjawa Sub-district fulfills their electricity needs, which is supplied from six Diesel Power Plants spread over five villages.


Even so, the hours of electricity supply in Karimunjawa are still limited with a maximum operating hour of 12 hours from 18.00 WIB to 06.00 WIB every day.


The duration of the 12-hour electricity supply is only enjoyed by residents of Karimunjawa Village, while the other four villages vary from only three hours to six hours.”