Karimun Jawa news
In September 2016, Karimunjawa Island will have an international event, namely Sail Karimunjawa 2016. This event is regularly held once a year, with the fixed destination being Karimun Jawa. 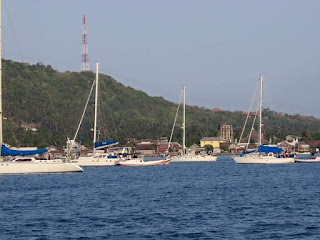 The following is information from the online newspaper SUARA MERDEKA which posted about the 2016 Karimunjawa sail, Cekidot:

SEMARANG, Suaramerdeka.com – Sail Karimunjawa was held again on Friday (23/9) to Saturday (24/9) at the Karimunjawa Harbor Pier, Jepara. The sea rally, which is attended by yachts (sail boats) from various countries, will stop for a week. There are two operators that direct yachts to Karimunjawa as a transit point before moving to Karimata, West Kalimantan, namely Wonderfull Sail Indonesia and Sail Indonesia. The two operators are estimated to be carrying around 60 yachts.


Head of the Tourist Information Center (TIC) of the Culture and Tourism Office of the Central Java Provincial Government, Sumartini said this year Sail Karimunjawa received support from the Ministry of Tourism. Karimunjawa, he said, has been designated as a National Tourism Strategic Area. “There are an estimated 60 yatch. Now there are four units that have been docked. They don’t come together. Hopefully the target can be achieved,” he said, Monday (19/9).


This sea rally has been going on since 2006. Since the last three years, many yachts have stopped in Karimunjawa through event sails. “This sail strengthens the branding of the charm of marine tourism in Central Java. Karimunjawa is the only marine destination in Central Java. Currently there are three routes, namely from Jepara, Semarang and Kendal,” he said.
(Zakki Amali/ CN40/ SM Network) About Karimunjawa
Karimun Jawa, The Most Beautiful Tourist Places in the City of Jepara