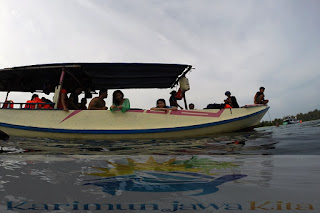 1. KMC Kartini 1
This ship has a capacity of 168 passengers with air conditioning facilities and departs every Saturday from Semarang, and returns to Semarang on Sundays from Karimun Jawa. Travel time from the port of Semarang is 4 hours of sailing. The ship’s departure schedule from Semarang is every Saturday at 09.00 WIB, and the schedule from Karimunjawa is Sunday at 13.00 WIB.

2. Express Bahari Fast Ship
This fast ship has a maximum speed of 29 knots, serving shipping from the Kartini port of Jepara and departing every Monday, Tuesday, Friday and Saturday. While from Karimunjawa every Monday, Wednesday, Saturday, and Sunday. This boat trip from Jepara to Karimunjawa only takes 2 hours. The maritime express fast boat is the fastest and classiest mode of sea transportation for trips to the island of Karimun Java. The Express Bahari ship has a seating capacity of 330 seats, with various seating classes. Starting from VIP class, executive class, to business class.

Maritime express fast ship departing from Jepara on average at 09.00 WIB, there is only one departure schedule at 10.00 WIB, namely every Saturday. Meanwhile, departures from Karimun Jawa have different times, for example Monday at 12.00 WIB, Wednesday at 11.00 WIB, Saturday at 07.00 WIB, and Sunday at 11.00 WIB. This maritime express fast boat has now become an idol for the people and tourists of Karimun Java.

3. KMP Siginjai
The motorized passenger ship (KMP) Siginjai heading for the crossing to Karimunjawa is a new ship that replaces the previous ship, namely KMP Muria. This ferry with a capacity of 500 passengers requires the longest travel time from Jepara – Karimunjawa between the two ships above, which is approximately 4.5 hours by sea. The Siginjai ferry, which was imported from Sibolga, North Sumatra, is said to be more powerful and bigger than KMP Muria and dares to sail above a wave height of 2.5 meters. for the backpacker to karimun java suitable to use the KMP siginjai ship because the ticket price is quite cheap.

KMP Siginjai ferry boat departing from Japan every Monday, Wednesday, and Saturday. The departure time of all these ships is the same, namely at 07.00 WIB. And sailing from Karimun Jawa every Tuesday, Thursday, and Sunday, with the same departure time, which is at 07.00 WIB. Prepare early if you want to take the KMP Siginjai ferry for a vacation to the island of Karimun Jawa.