indonesian tour, karimunjawa travel info, tour
There is interesting news related to Karimun Jawa tourism. This news was written by the online news website Kompas who wrote about the topic of swimming with sharks. In KarimunJava indeed there is one tourist spot that highlights swimming with sharks. The place is called the Karimunjawa Shark Farm. 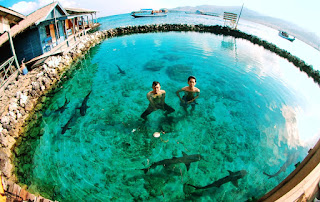 Now there are many who offer some animals as spectacle material. This has more or less attracted the attention of animal lovers. Most of them reject and deplore the commercialization of animals. For more information, read below.

“Swimming tours with sharks are now quite popular with tourists. Not a few tourists visit to taste what it’s like to swim in a pool filled with sharks. However, most of them also don’t understand the true nature of the shark pool tours they taste.


“This is exploitation in the name of conservation. Sharks can be stressed and there are other dangers for visitors,” said ProFauna founder, Rosek Nursahid.


According to Rosek, the possibility of danger to the visitors is quite large. Because, basically, sharks are wild animals as well as predators, so the risk of sharks attacking humans is likely to occur.


“In certain situations such as stress or hunger, all wild animals or predators will have an instinct to prey,” added Rosek.


In line with Rosek, nature conservation observer and former travel host Riyanni Djangkaru also thinks that swimming with sharks makes no sense. The reason for captivity which means breeding, according to him, is not suitable to be juxtaposed with these tourism activities.


“If you say captive sharks, it means that the purpose of conservation means we see it’s breeding, but that people pay for swimming,” continued Riyanni.


For Riyanni, the commercialization effort wrapped in conservation is very unfriendly to the environment, especially for the preservation of sharks. Riyanni said the probability of the shark dying would be higher because many sharks were stressed from having to swim in small pools.


In fact, the sharks are used to swimming in the vast ocean. Not only that, the preservation of sharks in the wild is also increasingly threatened by this tour.


“In order to attract people’s attention, the number must be increased, so the number in nature is decreasing,” explained Riyanni.


In response to this, WWF Indonesia’s Director of Communication and Advocacy, Nyoman Iswarayoga said that conservation efforts must maintain the authenticity of the animal’s habitat. He also did not deny the existence of swimming tours with sharks and other wild animals.


“The conservation function for research and public education does exist and is allowed, but it must be guaranteed that the animals that are there are treated properly,” explained Nyoman.


Even so, some important elements must still be considered by conservation managers, such as aspects of licensing and care during captivity. According to Nyoman, care is so important because these animals are basically wild animals, so the conservation area must be made to resemble their natural habitat.


However, currently one of the attractions for swimming with whale sharks, according to Nyoman, is legal in Cendrawasih Bay National Park, Manokwari, West Papua.”