Jepara tour
Troso ikat weaving typical of Jepara, is one of the icons of the city of Jepara besides carving. Jepara Regency is also known as a productive area, especially for handicrafts. Jepara carvings have already been known to remote parts of the country and are now followed by Jepara Troso Ikat Weaving.

The Troso area is part of the Pecangaan sub-district and is approximately 12 km from the city of Jepara. This area is one of the small industrial centers that have the opportunity to be developed, such as carving furniture (furniture). With the introduction of Troso Weaving in the region at home and abroad, more or less helped the economic development of the Troso community in particular and Jepara Regency in general.

A Brief History of Jepara Troso Weaving, along with the development of the times, of course, crafts such as weaving will increasingly be left behind. Many young people are ashamed to wear weaving, especially the Jepara troso weaving, in Jepara itself the young people or young people in Jepara are less enthusiastic about the ancestral heritage that may have existed since ancient times. Toso Jepara weaving itself has been around since 1935, this craft is obtained from generation to generation from the family.

At first the people of Troso Jepara made gedong weaving, then in 1935 their skills developed, by making pancal weaving. Well, since 1946, Troso residents have made machine-tool weaving (ATBM) whose results are often referred to as Jepara Troso Weaving. The prospective development of troso weaving has inspired villages near Troso village to do the same. Sowan lor village, Pecangaan Kulon village, which is adjacent to Troso village, is now doing the same thing, namely producing Jepara Troso ikat weaving, as time progressed, troso weaving began to be known by the wider community. 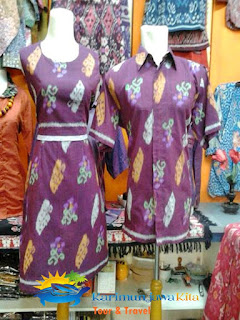 For those of you who want to visit the Troso weaving tourist area to see the products, you can contact the guide Karimunjawa Kita Tour after your vacation from the island of karimunjawa.